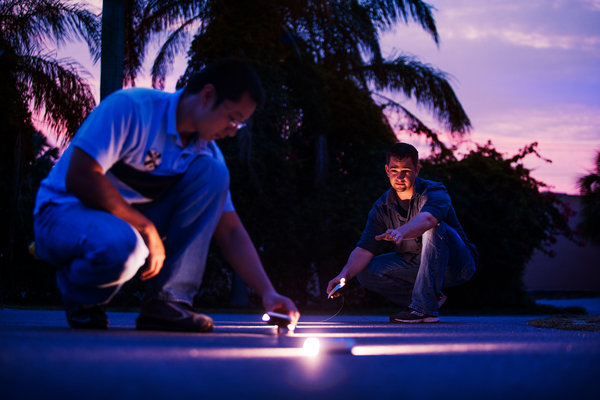 AFTER the joy of the birth itself, parenthood sometimes brings the unwelcome news that a newborn has jaundice and must wear goggles and be placed under special lights. Imagine how different this experience might be if there were no goggles, just a warm blanket covering the tiny body, a healing frequency of blue light emanating from its folds.

That comforting scene, already a reality in some hospitals, is evidence of the fundamental rethinking of lighting now under way in research labs, executive offices and investor conferences. Digital revolutionaries have Edison’s 130-year-old industry, and its $100 billion in worldwide revenue, in their sights. Color, control and function are all being reassessed, and new players have emerged like a wave of Silicon Valley start-ups.

“This is the move from the last industrial-age analog technology to a digital technology,” said Fred Maxik, the chief technology officer with the Lighting Science Group Corporation, one of many newer players in the field.

The efforts start with energy efficiency and cost savings but go far beyond replacing inefficient incandescent bulbs. Light’s potential to heal, soothe, invigorate or safeguard people is being exploited to introduce products like the blanket, versions of which are offered by General Electricand in development at Philips, the Dutch electronics giant.

Innovations on the horizon range from smart lampposts that can sense gas hazards to lights harnessed for office productivity or even to cure jet lag. Digital lighting based onlight-emitting diodes — LEDs — offers the opportunity to flit beams delicately across stages like the San Francisco-Oakland Bay Bridge — creating a light sculpture more elegant than the garish marketers’ light shows on display in Times Square, Piccadilly Circus and the Shibuya district in Tokyo.

“Up till now we only thought — do I have enough light to see, to clean my room, to cut a diamond?” said Ed Crawford, a senior vice president of Philips Lighting Americas. “Now it impacts what I do, how I feel, in emotional ways.”

In the United States, lighting consumes more than 20 percent of electric power generated each year; the Energy Department says LEDs can cut consumption by up to 80 percent. LEDs — also called solid-state lighting — are already a $12.5 billion business worldwide, according to analysts at the research firm Strategies Unlimited in Mountain View, Calif.  A 2012 McKinsey report estimates LEDs will be an $84 billion business by 2020.

But there is an obstacle or two facing the LED revolutionaries. One is existing modes of lighting: Edison’s screw-based socket, the office’s fluorescent ceiling tubes, and metal halide or sodium lights in parking lots are not going away anytime soon.

Another hurdle is public wariness after the environmental exhortations of the 2000s, which led to much-disputed federal legislation to phase out the old incandescents, often in favor of compact fluorescent bulbs. In pursuing their goals, advocates played down problems like the harshness of fluorescent light, and difficulties with dimming the bulbs and dealing with the toxic mercury they contain. Now, some lighting scientists say, both consumers and investors are leery of buying into something they suspect might be substandard.

Another powerful force for continuity is the psychological legacy of light as we know it — from sun to candle to bulb. Isn’t the cartoon shorthand for a new idea a glowing bulb over the thinker’s head?

So some companies are selling the new digital lighting in forms that will fit into the prerevolutionary world, with its sockets and streetlamps — including familiar bulb shapes.

Philips is producing a bulb called Hue that fits into the old sockets and not only dims and brightens, but also changes colors on command. Mr. Crawford said that in his lamps division, 25 percent of sales income now comes from LEDs; he expects it to increase to 50 percent in two years. In 2008, that number was close to zero.

One reason adoption will speed up, Mr. Crawford believes, is that in recent years, consumers have been asked to compromise on quality to get energy savings. With the latest generation of LEDs, he said, “the consumer gets the energy savings without compromise.”

The cost barrier is getting lower. Until recently, it typically cost $30 to buy an LED that could replace a 60-watt glass incandescent bulb bought for less than a dollar. Now Cree, a semiconductor manufacturer, has 40-watt and 60-watt LED equivalents for $10 and $14.

James Highgate, an expert on the new technology who runs an annual LED industry conference, sees a transition period ahead “for the next three to five years, until the eight billion sockets in the U.S. get filled” with LEDs. “Some people will never change,” he added. “They’ll be in the alleys buying 100-watt incandescents.”

But a new poll done by the lighting company Osram Sylvania showed that fewer consumers were listing “burned out or broken” as the main reason for switching bulb formats. According to a company news release, “68 percent of Americans say they have switched lighting for increased energy efficiency.”

Energy efficiency is only the beginning, according to experts on the lighting innovations. Take communication between lights. At the University of California, Davis, a bike path illuminated at night with a “just in time” system has one light node alerting another and another down the line as a bicycle goes by, progressively lighting the rider’s way, then dimming back into an energy-saving mode. 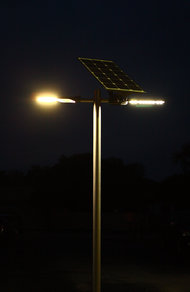 FROM THE LAB Lighting Science is working to improve things like streetlights, top.

Michael Siminovitch, director of the California Lighting Technology Center at the university, said that with the new technology “we’re going to be able to create a variety of control features in terms of how we introduce points of light in space, but we’re also going to be able to do it with planes and areas of light.” For example, he said, there could be light-generating ceilings or walls.

Engineers like Mr. Maxik at Lighting Science are now imagining cities that light their streets as needed, without benefit of lampposts. He has created a fixture that could replace the reflective medians in highways south of the snow belt. Once installed along the road’s centerline, they provide as much illumination as streetlamps. The metal and wiring that go into the streetlamp would be unnecessary.

Lighting Science has teamed up with Google to develop a light bulb — soon to be available — that is controllable with an Android phone app.

But just as it will take consumers a while to give up familiar light sockets for lights embedded in walls or ceilings, it is likely to take cities and their public works departments some time to give up their lampposts.

Recognizing this, other companies, like the newly renamed Sensity Systems (formerly Xeralux) are reimagining lampposts as nodes in a smart network that illuminate spaces, visually monitor them, sense heat and communicate with other nodes and human monitors.

In addition to such functions — which could raise privacy concerns, though perhaps less so after the Boston Marathon bombings — the new systems could sharply cut the cost of street lighting. The data could be sold to app developers who could create, say, an app to help find parking.

The idea, said the company’s chief executive, Hugh Martin, is “wherever there’s a light, there’s data being generated.”

Mr. Maxik said: “It’s the convergence of the light source, the novel controls we can apply to it and the ability to program it which makes solid-state lighting as a category unique. That becomes the enabler of the new forms and new functions.”

Many of the elements of the nascent revolution seem in place. A host of relatively new entrants — Lighting Science, Eye Lighting, Ohm Lighting and TerraLUX among them — are moving into what had been a market dominated by large, established companies like General Electric, Philips and Osram Sylvania.

In both the newer and older camps, researchers are trying to reimagine uses for light and ways of controlling it. What kinds of controls? Adjusting the intensity of a light between dim and bright, of course, has been done for decades — but not often in outdoor settings. Other options, indoors and out, include changing the frequency and color of the light, or having it pulsate — think of the multicolor displays atop the Empire State Building.

This color-changing capability has applications far beyond the theatrical. Consider sea turtle hatchlings leaving nests along the Florida coast that are led astray by bright white lights, luring them inland when they should head seaward. Lighting Science is one ofseveral companies that offer a solution; its $29.99 amber “turtle lights” are on sale in Satellite Beach, Fla., near the most active turtle nesting area.

For the workplace, Osram Sylvania’s researchers are looking to control light to improve office productivity. As Lori Brock, director of research and innovation at the company’s technology lab in Massachusetts, said: “It optimizes the illumination for the task you’re doing. If you sat at your desk to use the computer, maybe the overhead light would dim, increasing the contrast so you could see better. Other lights could go to an energy-saving hue.” Ideally, productivity increases while energy costs decrease.

As for health applications, the Lighting Research Center of Rensselaer Polytechnic Institute has focused its research on the physiological and psychological impacts of light. This might lead to light fixtures in hotel rooms and elsewhere that enhance sleep or restore the circadian rhythms of jet-lagged travelers.

Philips’s lighting division is working on a product that allows people with psoriasis to have light treatments at home, not in the hospital. It has also introduced a blue-light-emitting poultice to relieve muscle pain by releasing the nitric oxide in the patient’s system, stimulating blood flow.